While the phrase “content marketing” might be pretty new, the concept has been around for a very long time.

By getting a clear idea of what’s gone before, it’s easier to see why content marketing is so very important today.

Let’s take a quick tour of content through the ages… 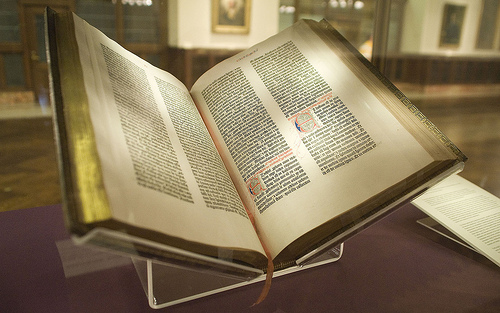 Back in 4200 BC, a caveman drew on the wall of a cave. If we gave the painting a title today, it might well read “6 Ways a Spear Can Save You From Wild Boar”. That sounds like a pretty compelling piece of content!

Skip ahead a few thousand years: in 1440, Johannes Gutenberg invented the printing press, enabling books to be mass-created. It took until the 1450s for the first widely distributed book to be published: The Gutenberg Bible. Stories, or content, were finally available for the masses.

In 1895, the John Deerecompany (who sold agricultural products) launched the first customer magazine, The Furrow, which educated farmers on new technology and how to use it.

The Furrow often credited as the first major example of content marketing and almost a hundred and twenty years later, it still has a circulation of 1.5 million in 40 countries.

(You can find out more about The Furrow, and other early content marketing success stories, in Joe Pulizzi’s article What Content Marketing’s History Means for Its Future.)

The first public TV and radio transmissions for entertainment took place in the 1920s – but it wasn’t until the 1930s that these became much more widespread. In the 1940s and 50s, Soap Operas (serial dramas) became increasingly popular – the name came from early advertisers, sponsors and even producers, who were mainly from the soap industry.

Between the 1930s and 1980s, we didn’t see much new in the way that content was distributed. But we did see a rise in advertising on all existing forms of media, as marketers discovered early on the power of storytelling and the impact it could have.

Google launched in 1995 but it wasn’t until the late 1990s that Internet access became widespread. To begin with, websites were static, created by “webmasters” with technical expertise, and marketing was very much aimed at the masses. But as the Internet grew, it became possible for anyone to create their own content on forums. In 1999, blogging began to become popular. This is when the web started to become really social and it was possible to make marketing more personalized.

Facebook first appeared in 2004 (and opened up to non-students in 2006) and Twitter was launched in 2006. Social media as we now know it was born, allowing individuals to connect with brands in a far more interactive way, and share stories and content with friends.

Social media lets your customers do the sharing and marketing for you – and on a global scale. There is no better advocate. It’s far more personal than previous mass media marketing, and it’s very easy for content to be shared.

What this means for you

It’s really important to remember that content marketing isn’t some newfangled technique that’s at risk whenever Google updates, or whenever a new social media site appears on the scene. While individual tactics might change, underlying strategies (connecting with customers through engaging stories and useful information) are timeless.

The art of storytelling hasn’t changed, but the medium has.

Today, it’s easier than ever for brands both big and small to build connections with customers and potential customers. You don’t need to start a magazine, like John Deere, or produce a soap opera, like Proctor and Gamble: you can launch a blog, Twitter account, Facebook page and so on for free. (The only cost is your time, or your team’s time.)

Here’s how to make the most of your opportunities:

#1: Remember the importance of story

Great stories — with a beginning, middle, and end, and compelling characters — have existed for thousands of years. Although technology is changing fast, the elements of good storytelling are the same as ever.

Stories help you build an emotional connection with your audience, and we explain how to get them right in Why Storytelling is Such a Powerful marketing Technique.

It’s easy to be sceptical about the latest innovations in the online world — after all, social media sites come and go (remember MySpace)?

We’re not suggesting you jump on every bandwagon going, but do remember that early adopters often get certain benefits, like press attention (as with Urban Outfitter, one of the first brands onto Vine in 2013).

Don’t get caught up with tactics that are very specific to a particular social network, or the current Google algorithms. While tactics certainly matter, it’s important to have strong underlying strategies — that way, if something beyond your control changes, you can easily come up with new tactics.

For instance, a strategy might be to use customer’s stories in your marketing; a specific tactic might be to highlight these on your Facebook page every Friday.

#4: Understand how significant sharing is today

The biggest change that social media has brought is the incredible ease of sharing — and the ease with which a particular message can be amplified. This can be hugely beneficial for content marketers (i.e. when content goes viral) … but it can also mean that negative attention gets amplified too.

Word of mouth has always been important, but twenty years ago, that meant conversations over coffee — not messages sent instantly around the world. Every single word you publish online is part of your marketing, including tweets and Facebook replies to customers. (Emails count too — even if they don’t feel public when you send them, they can easily be forwarded or published online.)

It’s clear that content marketing and storytelling are here to stay — after all, they’ve been around for thousands of years. Make the most of your opportunities, and create content that’s as useful and engaging as possible for your target audience.

If you’d like to know more about content marketing, book a place on our day course. You’ll learn about strategy, development, promotion and outreach, with lots of practical tips and hands-on examples during the day. All our courses are limited to eight participants maximum, so you have plenty of time to ask questions.