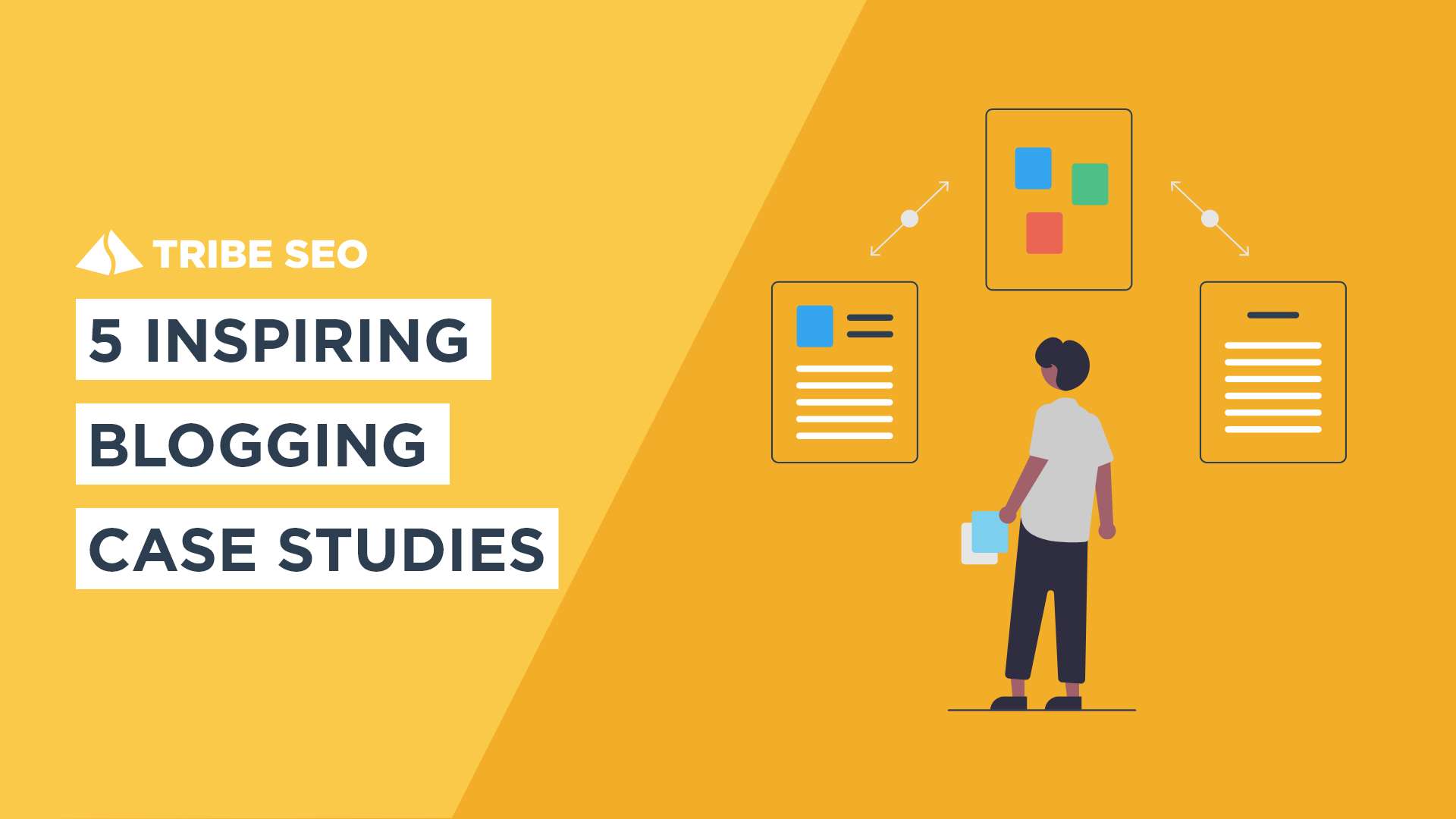 What could blogging do for your career, or your small business?

You might feel that blogging is something you “should” be doing – perhaps you have an idea of some of the advantages it might bring – but it may be very hard to find the time or motivation.

As you read each one, ask yourself whether a successful blog could do the same for you...

#1: Digital photography school, the blog that became a business

Although we believe that blogs are powerful ways to boost your business, we also know that some bloggers begin the other way round: they create a blog first, then turn that blog into a small business. 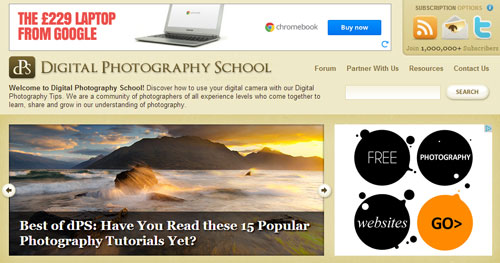 Darren Rowse started his blog Digital Photography School (dPS) in April 2006, writing all the posts himself. You might like to take a look at his initial goals for the dPS blog, posted in August 2006 on ProBlogger. At that point, he wrote:

My [dPS] newsletter subscriber list has grown to around 1800 subscribers"

Those are some great stats for a blog that was less than two months old ... though keep in mind that Darren already had a strong blogging presence with ProBlogger, and was able to bring in readers from some of his earlier photography-related sites.

It wasn’t until 2009 that Darren launched his first ebook for dPS; until that point, he’d been monetising the blog through other methods like advertising and affiliate links. In $72,000 in E-Books in a Week – 8 Lessons I Learned, he wrote:

"Both with this Portrait e-book and the development of 31 Days to Build a Better Blog workbook I’ve discovered that having a product of your own is something quite powerful. Not only is it an income stream – but it’s something that has a real impact upon both your readers and your standing in your niche/industry."

Now, in 2013, Digital Photography School is a huge site – and a full business. The blog has over a million RSS / email subscribers. It sells ten photography-related ebooks, by a number of different authors, and also runs some advertising.

If you already have a blog, perhaps focusing on one of your hobbies or career interests, could you turn it into a small business?

You might already have tried some monetisation methods, like putting ads onto your site, or promoting affiliate products ... but, as Darren found, the best way to make serious money from a blog is by selling something of your own. That could be your services (e.g. web design, copywriting, consulting) or your products (particularly electronic ones, like ebooks, which have no overheads).

#2: PluginID, the blog that had huge SEO benefits

Just as flowers attract bees, who make honey, great blog posts will attract links – which produce “link juice.” This link juice is what makes your site look attractive to Google and other search engines, like a delicious jar of honey – and it means your site will rank more highly in search results.

When 19-year-old Glen Allsopp started PluginID, he knew he wanted to build it into a big player in the already-crowded personal development niche – and that meant paying close attention to SEO.

It helped that Glen had spent several years learning about SEO and social media: he built his first website at the age of 15, and when he was 18, he was social media manager for huge brands like Land Rover and Hewlett Packard.

His site PluginID took off – thanks largely to his powerful, attention grabbing blog posts, which won attention and links from other bloggers. As Glen explains in How I Really Built a Blog with 6,500 Subscribers:

"I paid $100 to have someone code me a rankings script that showed the top sites in my niche, and then I emailed every individual blogger to congratulate them for their rankings.

As well as high-quality posts on his own blog, Glen did a huge amount of guest posting to promote his site, not just to get attention from the readers of other personal development sites, but – crucially – to get links from some of the biggest blogs around.

PluginID became the 10th largest personal development blog in the world, and Glen sold it after around a year and a half for a five-figure sum. He attributed a large amount of his success to search engine traffic:

"Around 15,000 people land on PluginID every single month directly from search engines and that is constantly increasing. How would 1,000, 5,000 or even 15,000 extra visitors to your site affect your stats?"

Glen wasn’t known at all in the personal development world when he started PluginID – but he quickly built that blog, through the power of great content. He didn’t stop with PluginID either: his internet marketing blog ViperChill has 26,000 subscribers.

You don’t have to be a known expert in your field to produce great content, for your blog and for other people’s. Learn from Glen by producing hugely valuable blog posts (think quality, not quantity) – and use the power of guest posting to gain powerful links that offer a huge boost your SEO efforts.

Scott Stratten had a successful business, UnMarketing, which delivered great results for clients wanting viral videos – but he didn’t have a strong social media presence of his own until he started the UnMarketing blog and Twitter account. 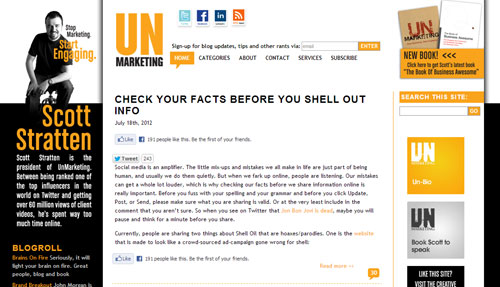 He began posting on his blog in mid-2009. Scott’s blog is an interesting example of how frequent blogging isn’t the only key to success – while he began with roughly weekly blog posts, he now only blogs once every month or two. Scott’s strategy revolves around building connections: he emphasises the importance of using Twitter as a two-way medium.

While Scott’s focus has been primarily on his Twitter account, his blog is still crucial: it gives him a place to showcase longer content, and to promote his speaking services and his book UnMarketing, which came out in 2010.

As Scott’s About page puts it:

"[Scott] now has over 135,000 people follow his daily rantings on Twitter and was named one of the top 5 social media influencers in the world on Forbes.com. It’s the only time he’s felt comfortable being compared to Ashton Kutcher, P Diddy and Justin Bieber."

As you can see, Scott doesn’t just get attention from the online marketing community: his name has been prominent in international media (Forbes.com), giving him and his business a huge amount of credibility. He’s a regular keynote speaker at conferences, too.

You don’t need to be a marketer (or even an unmarketer...) to take advantage of the power of blogs and social media. By writing great content on your blog, and by building strong social media connections, you can create a name for yourself in your industry.

To build a reputation, make sure you’re producing high-quality content, and try to get across your unique voice and viewpoint (read any of Scott’s posts to see how he does this). Don’t be afraid to occasionally take a controversial stance.

Perhaps you’ve been struggling away with traditional marketing methods for years – like paying for ad space in your local newspaper, or sending out physical mailshots. Blogging (along with other online social media tools) offers business owners much more cost-effective – and often more powerful – ways to raise their profile and bring in new business. 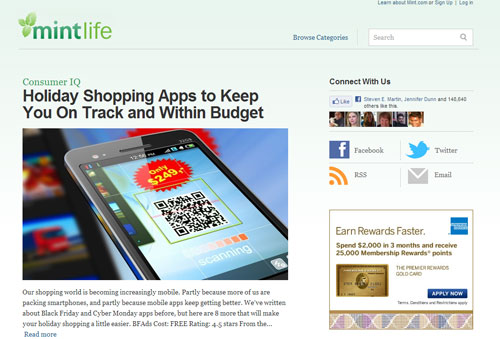 The personal finance niche is perhaps one of the most crowded corners of the online world. When Mint launched in 2006, they were a brand-new start-up in a very busy space, up against established companies like Quicken. But their blogging strategy saw them stand out from the competition, and they devoted significant resources to their blog.

"News and tips posts, link roundups, slideshows, videos, and infographics were all key components in Mint’s content strategy, and they were held to a strict editorial standard. By establishing itself as a smart resource that was easy and accessible to the financially curious, Mint was able to leverage its content credibility to convert readers into buyers of its actual product."

Mint had very high standards for their blog – and worked consistently to produce great content. As well as blog posts, they pioneered the use of infographics (now widespread in the blogging world). You can see one infographic example in their History of Mint timeline here.

Without this content strategy, it would have been very easy for Mint to simply sink unnoticed. Instead, after three years, founder Aaron Patzer sold his company to Intuit for over $170 million.

If you’re struggling to stand out from your competitors, look for ways to use the power of blogging to give you a boost. That means posting great content on your own site that connects with your customers’ needs – as well as reaching out to other bloggers in your industry.

Branch out beyond written content, too: look at ways to use videos, slideshows and infographics to connect with customers in new ways – and to get attention.

#5: The amazing adventures of diet girl, the blog that led to a book deal

Some bloggers, particularly those who see themselves as writers (or harbour writing ambitions), use their blog as a stepping-stone to a book deal. Book publishers are increasingly keen on authors who already have a platform – a blog or mailing list that allows them to market directly to already-interested readers. 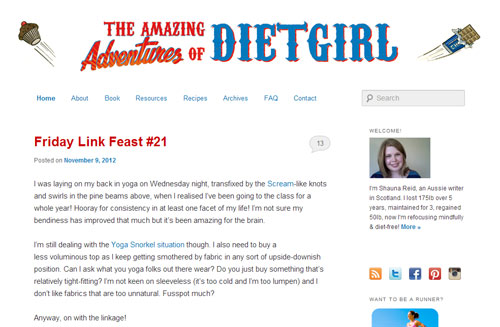 In 2001, Shauna Reid decided to lose weight, and started a blog to chronicle her journey. On her About page, she explains:

"Back in 2001, a block of chocolate was an afternoon snack. I couldn’t walk to the end of the street without feeling like my lungs would explode. I had rubbish self esteem and struggled with depression. I’d outgrown the largest clothes in the Fat Shops.

[...]  Slowly I began to see how I was letting my weight dictate everything I did with my life, or rather what I didn’t do. It was just a quiet realisation that I couldn’t go on this way any longer. I had to try and turn things around."

Her blog gradually gained momentum, building a loyal audience of readers who cheered Shauna on in her efforts, sympathised with her when things weren’t going so well, and celebrated her successes.

As well as losing half her initial body weight – a fantastic and life-changing achievement in itself – Shauna landed a book deal. Her memoir The Amazing Adventures of Diet Girl was published by Harper Collins / Transworld in 2008.

Shauna didn’t stop with a book deal: she continues to blog, and co-runs e-courses on running. She has over 4,000 followers on Twitter, and over 2,000 “likes” on her Facebook page: very respectable numbers, but ones that show that you don’t necessarily need a massive following to get publishers’ attention.

More and more bloggers are landing book deals from their blogs (Scott Stratten and Darren Rowse, both mentioned in earlier case studies, both have books out). If you want to follow a similar path, the key is to build a blog with a loyal readership – not necessarily a huge one – and to focus on developing and honing your own writing style.

An inspiring personal story, like Shauna’s, can work well: what adventures of your own could you write about? (Perhaps travel, parenting, or overcoming adversity?)

If you’d like to find out more about how blogging could help you and your business, check out our blogging day courses. We offer introduction training for brand new bloggers – and anyone wanting a recap on the basics – as well as intermediate training for more experienced bloggers who want to take things to the next level.