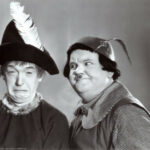 Social media marketing is crucial for every business in today’s world – whether small or large.
Some business, though, don’t quite get it right. And some make mistakes that get splashed across the headlines. Going viral might well be what you’re aiming for … but not like this.

These seven social media fails show that there definitely is such a thing as bad publicity. They serve as great examples of what not to do.

Warning: some of these examples contain offensive language or sentiments.

If you’re familiar with Twitter, you’ll have seen hashtags – words, short phrases or acronyms with a # symbol in front of them.

Some companies are tempted to “piggyback” in hashtags, knowing that users may well search on those particular tags – and thus see their promotional tweet.

In this case, though, Habitat ended up looking like a spammer with no regard for Twitter etiquette: 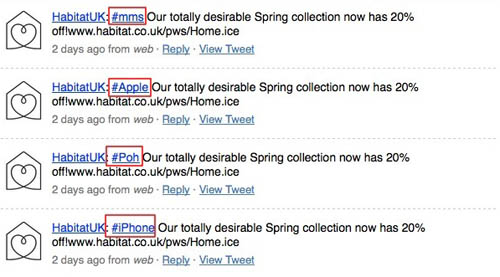 Cornetto UK sent a light-hearted Facebook update very shortly before 11am on Remembrance Day (11th November). Understandably, many of their Facebook followers were offended by the timing – the update struck an inappropriate tone for that particular moment.

Whether this was a badly-time pre-scheduled update, or one sent out by someone who wasn’t thinking, it was a big mistake. 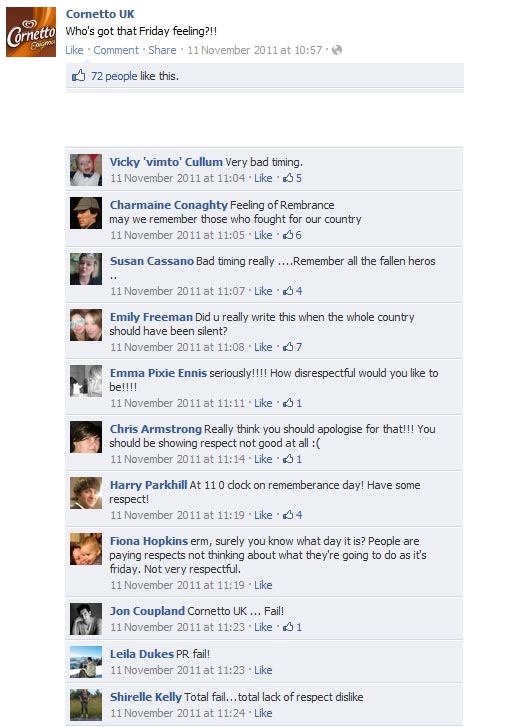 Toyota’s campaign to promote the Camry made a poor impression of Twitter users, by targeting individuals directly with unwanted messages. Worse, the content was blatantly promotional and self-serving – hardly an ideal way to make a good first impression on a Twitter user. 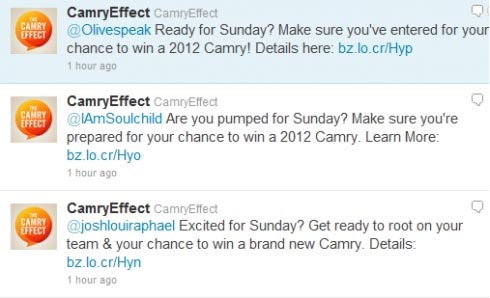 Image from Social Media Campaigns: Case Studies of the Biggest Fails of 2012 (So Far), Social Axis

In an even worse mistake than simply spamming a hashtag, Kenneth Cole made light of the May 2012 Cairo riots with an exceptionally ill-judged tweet:

After some unfortunate PR mistakes by CEO Robert Duffy, Mark Jacobs temporarily assigned the Twitter account to an intern.

Unfortunately, the intern clearly hadn’t had a very happy time in their role – and wasn’t afraid to let all 114,000 followers of the Mark Jacobs’ Twitter account know about it. 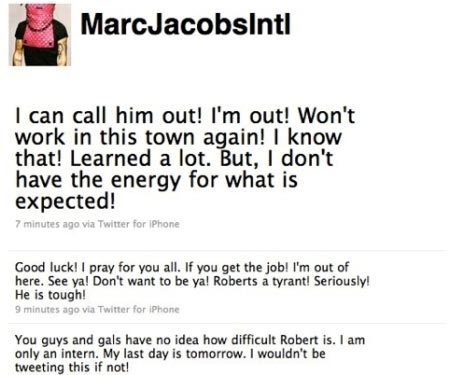 After a disappointing meal at a BBQ restaurant, a customer, Stephanie, left an in-depth, and balanced, review on Yelp.

The owner of Boners BBQ took expection to this, though, and posted Stephanie’s photo and an angry comment about her on their Facebook page, and on Twitter. (They also accused her of not tipping, though in a later response on Reddit, Stephanie explained that she did tip.) 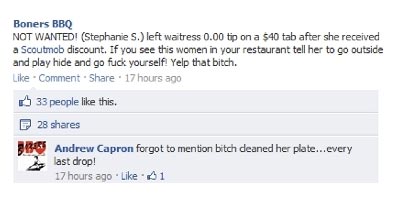 Image from Worst Use of Social Media in 2012: Boners BBQ,  UnMarketing

Before long, social-media savvy users on Facebook and Twitter realised what had happened – Boners BBQ had snapped in response to Stephanie’s Yelp review.

#7: KitchenAidUSA Insult the US President … and his Dead Grandmother

Image from Lessons from KitchenAid: Even the worst social media mistakes are preventable, Chicago Tribune

In this very recent fail, the KitchenAid account was used to tweet an offensive message during the US presidential debate in October 2012.

It’s clear that the individual in question didn’t intend to tweet from the company account. KitchenAid were swift to apologise. They were honest about what happened (rather than claiming that the account had been hacked), and this went some way toward repairing the damage done the their brand.

As someone who loves social media, and who’s had many business benefits from it, I couldn’t help but cringe at these examples of companies getting it very, very wrong.

It takes time to learn the etiquette and nuances of social media, but generally, a few simple rules of thumb will serve you well: